With much regret, it has been announced that our friend and Association Honorary Member John Fox died on Friday 29 April 2022, having been in Hospital for some weeks. 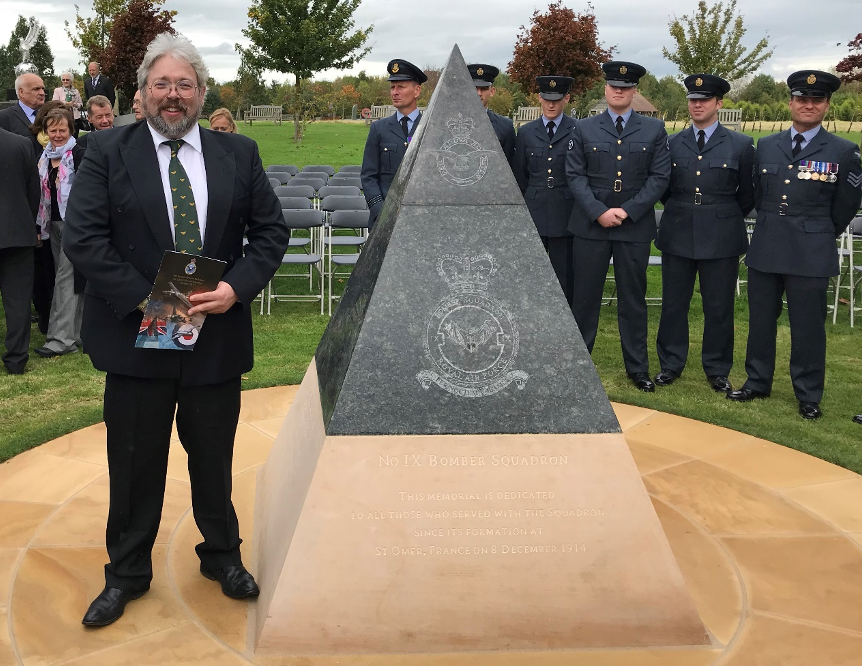 In 2017, John designed the amazing IX(B) Sqn memorial, seen above. His design notes are:

The monument’s 3 colours are as follows:

Polished brown granite derived from the Khaki of the RFC at the Squadron’s formation in Dec 1914.

Polished green granite derived from the bat on the Squadron’s Official Crest.

Sandstone derived from the Squadron’s history of operations in desert regions throughout its history.

The monument’s shapes are as follows:

The triangular shape represents the Geodetics used for navigation and the Wellington’s airframe.

The monument’s design angle is the travel sweep of the Tornado wing.

The monument’s orientation is as follows:

The main Dedication panel is South facing and lit by the sun throughout during the day, to represent IX(B) Squadron’s achievements throughout its unparalleled history.

The First World War panel is West facing and lit by the setting sun, to represent western front operations.

The final panel is East facing and lit by the rising sun, to represent operations in the Middle East.

Below are some more of John’s work. Originals and prints are still available. 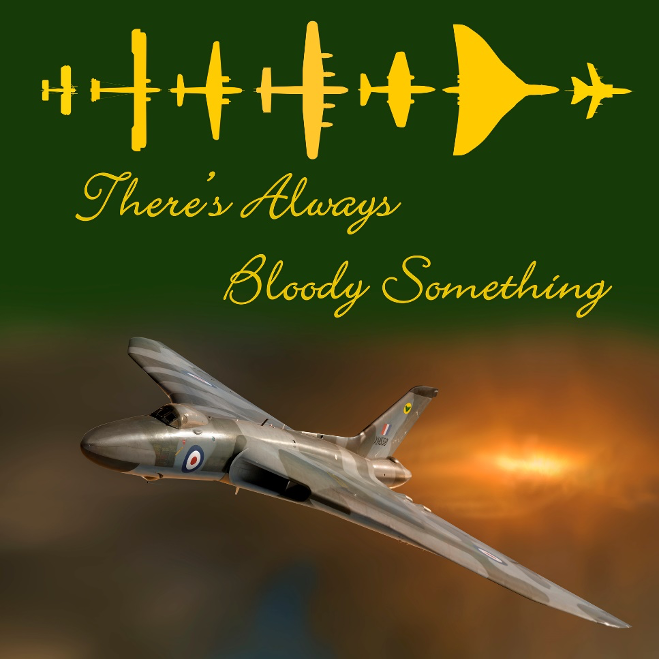 It was John’s idea to depict the Lancaster, Canberra, Vulcan, Tornado and Typhoon in plan form for Reunion table runners and booklets.

John’s recent drawing of a Johnny Walker mine, as used in OP Paravane. 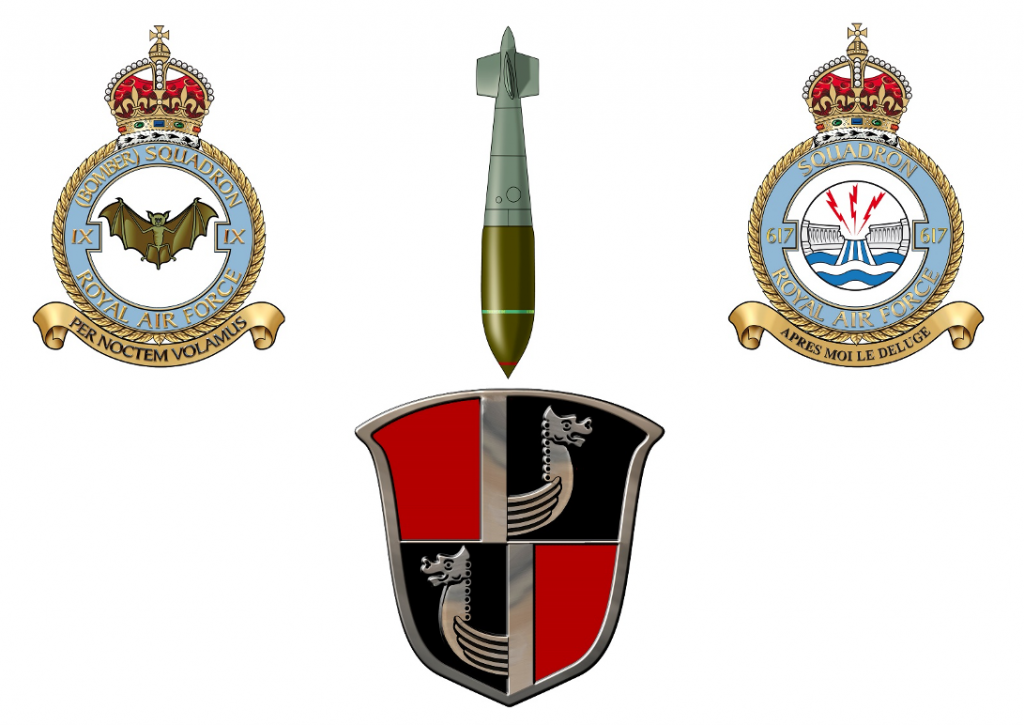 John was a master at telling a story in graphics. He positioned the crests of IX(B) Sqn and 617 Sqn, straddling a Tallboy bomb facing the Tirpitz crest. 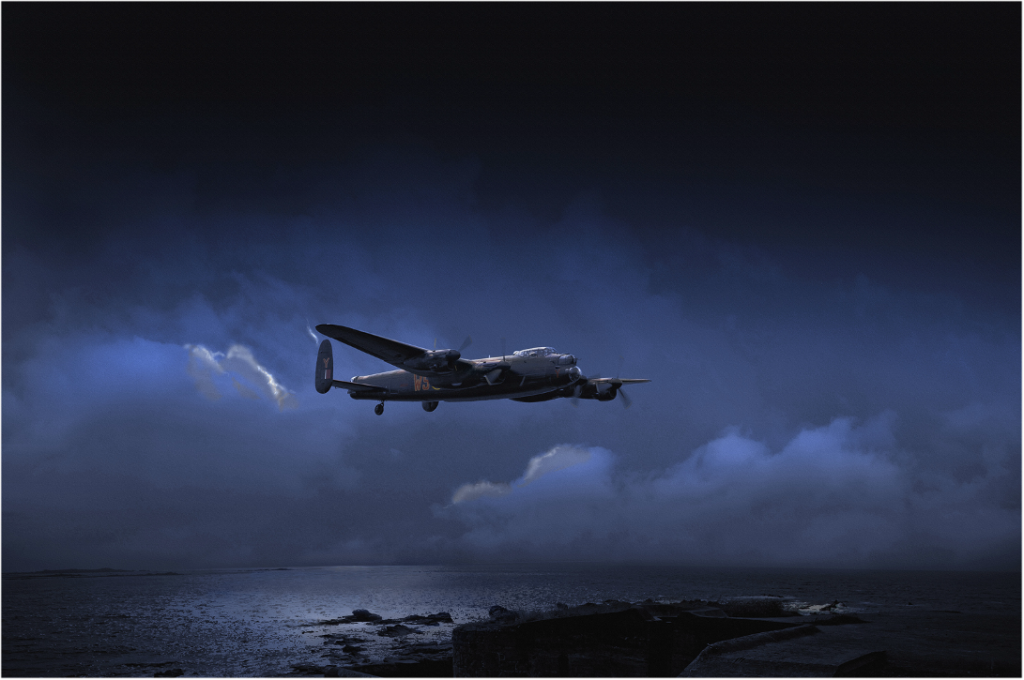 John’s depiction of a Lancaster crossing the coast line.

He was a stalwart of the association reunions, and fiercely loyal to IX(B) Squadron. He was a friend to many and we will miss him dearly.

The annual Bardney Remembrance service on 14th Nov is looming, if anyone is interested in attending the service and the lunch afterwards, please see the attached document for all the details and reply to the Chairman by COP Friday 5th Nov.

Also, if you’ve moved house or changed email address in the last 12-18 months, please let me know so we can update our databases!

We hope to see some of you next month.

The Dinner will be held on the evening of Saturday 13 November. The following day members of both Associations and their guests are invited to St Peters Church in Woodhall Spa for a Remembrance Day Service. This will be followed by a parade to the centre of Woodhall Spa and the laying of wreathes on the town War Memorial and the 617 Squadron Memorials.

Members and guests are then invited to travel independently to Woodhall Spa Airfield for a further short service and wreath-laying ceremony.

There will be sandwiches and cake available for a small charge in the Petwood Hotel after the visit to the Airfield.

Members are advised that the Hotel continues to take anti-Covid precautions and encourages guests to do likewise. In particular, any meals other than the Dinner on the Saturday evening and the Sandwich/Cake lunch on the Sunday must be booked in advance directly with the Hotel.

Please complete the attached a booking proforma as soon as convenient and not later than 30 September. If you have any questions please contact me, Ian Dugmore, by e-mail or phone: Sec617@outlook.com 07889 150836

IX(B) Squadron Association Members may wish to know that their Project Officer for the event is Lenny Nixon at association.vicechairman@9sqn.co.uk

I am afraid it is my sad task to once again inform you that the planned reunion weekend in October, at RAF Lossiemouth, has been postponed until July 2022, exact date to be confirmed in due course.
A combination of stricter COVID restrictions in Scotland and the continuing uncertainty around the rising numbers of infections across the UK were already putting plans in doubt. At our Committee meeting this week the final TABS moment appeared when we were informed by the Squadron representative that the Squadron will now be deployed away from Lossiemouth during October.
It is the Committee’s aspiration to enhance the links between the Assn and the Typhoon era personnel and with very little chance of meeting them in numbers, the decision has been taken to postpone the weekend and reunion dinner.
The good news is Alfie Ferguson has again volunteered to be the Project Officer as we roll things into 2022, so all of his hard work and contacts will not be wasted.
In light of this cancellation, some of you may now wish to attend the Tirpitz Dinner with the Junior Sqn Assn on 13 Nov 21 at the Petwood Hotel, Woodhall Spa. If you would like to take up that option, could you please contact Lenny Nixon at association.vicechairman@9sqn.co.uk
Dean Wood
Association Secretary

Air Chief Marshal Sir Stuart Peach has been greeted at Royal Air Force Northolt by a Guard of Honour to mark his retirement from the RAF and leaving his NATO position as the Chairman of the NATO Military Committee, a role he has held since 2018. 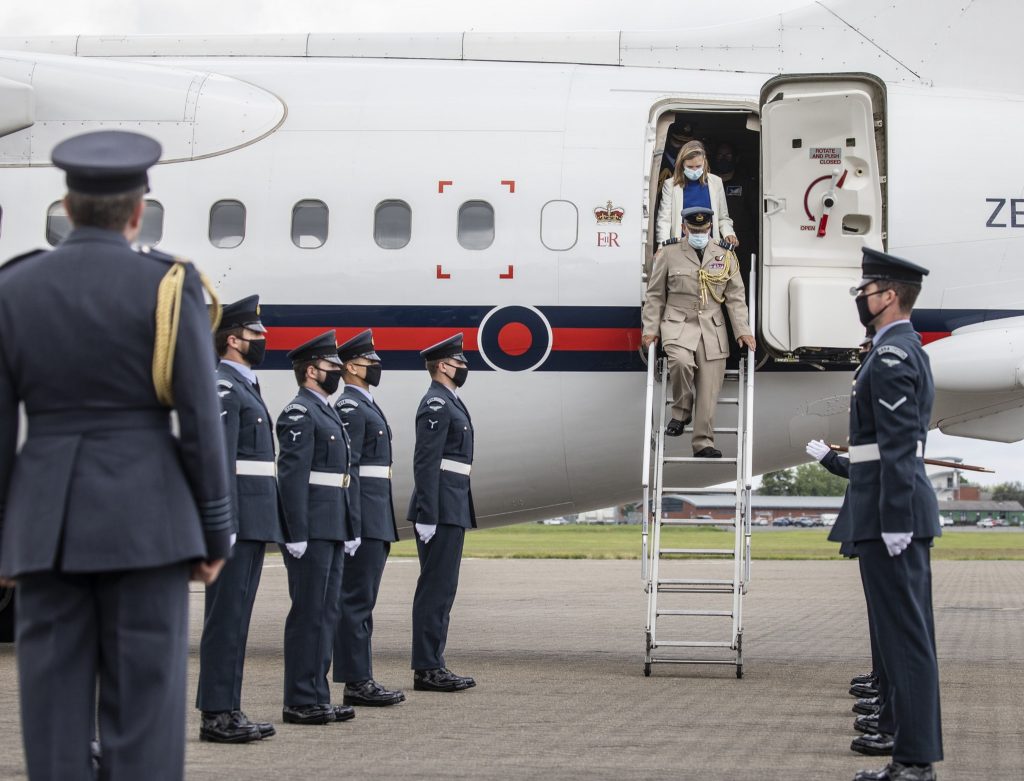 On arrival at RAF Northolt Sir Stuart was greeted by a Guard of Honour formed by the @RAF Regiment and escorted from his aircraft by the current Chief of the Air Staff, Air Chief Marshal Sir Mike Wigston who congratulated Sir Stuart on his astonishing career and on behalf of the RAF, and indeed the whole of the Armed Services, thanked him for his service and wished him the very best for his retirement. 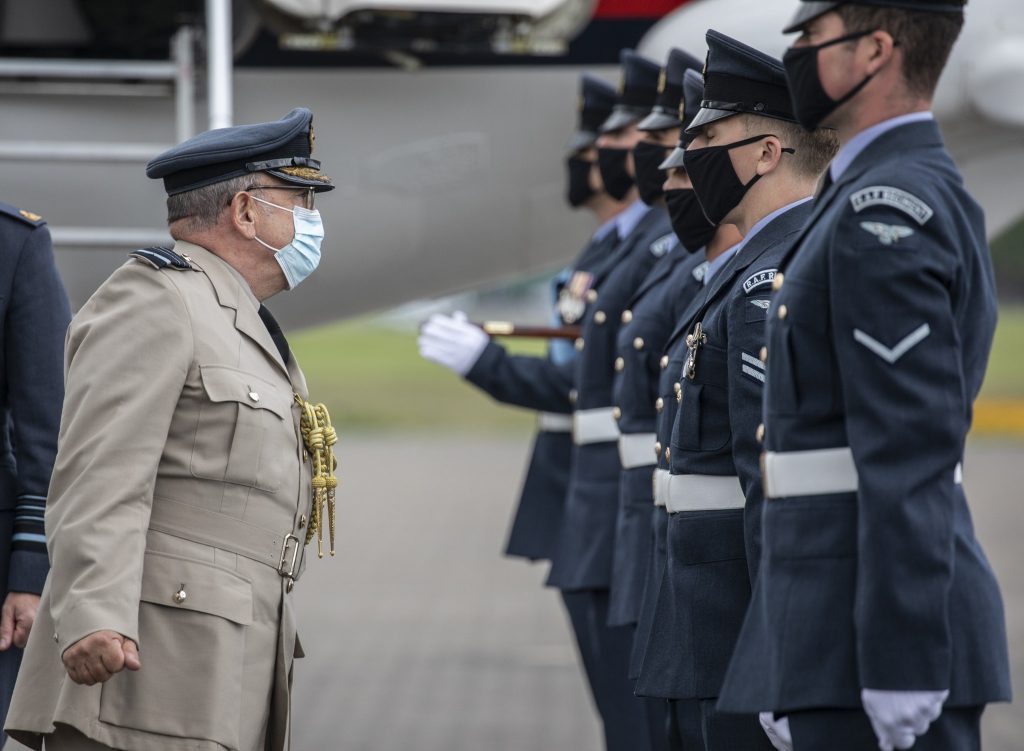 Reflecting on ACM Peach’s career, ACM Sir Mike Wigston said: “Sir Stuart Peach is one of the great military leaders of modern times. He has served the Royal Air Force, the UK, NATO and the international community with distinction for nearly 50 years. Today he finishes his stellar career and returns home from NATO; but something tells me he won’t stop there.” 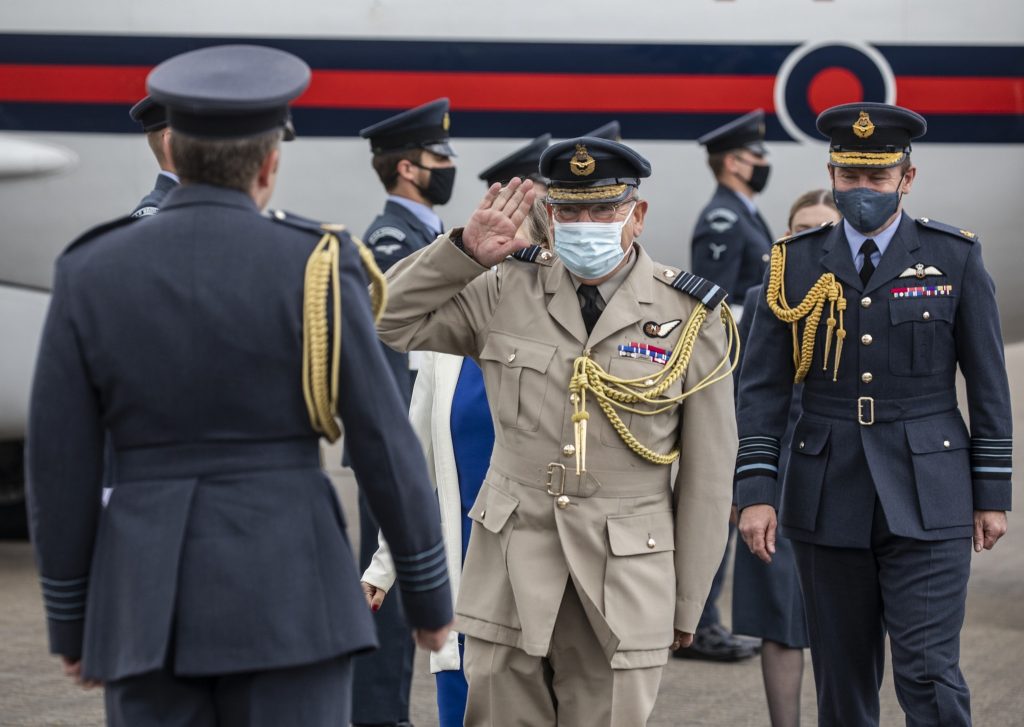 “I would like to thank the RAF for looking after me for all these years.  I started my flying career in 1974 and I flew on an AWACS mission last week which was an excellent way to bring almost 50 years to a close.  I was a Tornado Navigator and squadron commander for a chunk of my life.  I flew that aircraft for 20 years and most of those missions were in support of NATO.  NATO matters.”

Due to the current climate, the Association Committee has decided to hold the 2021 AGM virtually like we did in 2020.

Minutes from the previous AGM can be viewed below.

Once the finer details are ironed out, I’ll post a link here to the AGM so if you wish to dial in, you can.

The Association is planning to hold the 2021 reunion at RAF Lossiemouth in October 2021. Alfie Ferguson has re-opened his travel agency, and members should have been contacted. There will be an end of year email going out over the next few days that will cover off this and other planned dates for 2021.

Hopefully we will see the back of the turmoil that has scuppered all our plans for 2020, and we will meet again!

On behalf of all the association committee, we wish you all the very best Christmas, and hopefully 2021 will bring us better times!

As always, our thoughts are with those serving overseas at this time of year, and those for who 2020 has seen tragedy strike.

Due to the lack of a reunion this year, the Association is holding a virtual raffle with various prizes to be won!

For all the details, please see CLICK THIS LINK

Sadly the Cenotaph march past has been cancelled for 2020.

The association is still planning to hold its annual remembrance service at Bardney, unless COVID lock down rules prevent this form happening.

I am sure it will come as no surprise that at a virtual meeting of the Association Committee last night, we agreed that the September 2020 Dinner at RAF Lossiemouth should be cancelled. In reality we had no choice as Lossiemouth had already cancelled all their 2020 functions before and after our planned dinner.
Those of you who have paid deposits will be contacted separately by the Vice President (Assn Lead) regarding your options.
It is our intention to hold the 2021 Reunion Event at RAF Lossiemouth, subject to all of the normal approvals; the provisional date is Sat 18 Sep 21 and we will aim to get early confirmation.
There may also be an opportunity to dine with the Junior Squadron Assn at the Petwood hotel, Woodhall Spa, on Sat 7 Nov 20. If you are interested please let Lenny Nixon, the Vice Chairman know by 31 Jul 20; he can be contacted at association.vicechairman@9sqn.co.uk