We are sad to inform you that Flt Lt Denis Mason DFM passed away on 11 May 2017. Denis was a Bomb Aimer & Air Gunner on Wellingtons and Lancasters. Denis completed two tours on 9 Squadron during WW2 and survived 66 missions.

In November 1942 he had already amassed 65 bombing missions, but was still only twenty years old. He was posted as an Instructor in Oxfordshire, and whilst waiting at the railway station for transport to his new camp, he met a 17 year old WAAF called Yvonne, who he chatted to. They subsequently married on 6 January 1945 and were married until his passing 72 years later.

Denis’s Funeral was held at All Saints Church, Sherburn-in-Elmet, Yorks on 30 May 2017 and 9 Squadron and its Association were represented by W.O. Richard Lyons.

I am very sorry to have to pass on the news that ‘Jock’ died peacefully in his sleep on Good Friday at the age of 97. I would normally write a little bit about Jock but I think the following letter from his son-in-law to the Association Secretary in 2011 sums Jock up much better than I can. This is reproduced by kind permission of the family:

“My father-in-law, Flt Lt Allan “Jock” Richardson, started WWII as a Sgt Weapons Operator/Air Gunner on Wellingtons at RAF Marham. During the war he was commissioned, went through pilot training and ended up flying Lancasters on a Pathfinder squadron. He and his wife, Triss, live in Swaffham. During a party at Swaffham Golf Club to celebrate Allan’s 90th birthday in 2009, Dicky James, representing the Stn Cdr presented him with a signed print from all at RAF Marham. It was a personal touch that was much appreciated.

For a number of years we have been trying to get Allan to visit RAF Marham on the afternoon of the IX(B) Sqn reunion so that he could re-acquaint himself with the Lanc. He has steadfastly resisted. However, this year Viv, my wife, had driven down to Swaffham from our home in Cheshire to collect her parents and bring them back to stay with us for a week. We were due to return them to Swaffham on the day of the reunion. So, a little bit of subterfuge was called for! During the week prior to the reunion I was in contact with Dicky and he kindly arranged for me to bring my vehicle on to the Sqn HAS site (subject to a tyre FOD check) and drive up close to the Lanc.

As we drove my in-laws back towards Swaffham I told Allan that we needed to call in at RAF Marham to see someone about the reunion dinner that evening and he said that would be fine. As we drove towards the Sqn HAS site I tried to sound surprised when I said to Allan “Oh look, there’s the Lanc parked up”; “So it is” he replied. We drove up and parked near the aircraft and I said “come on out and have a closer look”. As we approached the Lanc there was clearly some dust in the air as Allan’s eyes got a little misty!

I was able to get him on board where he was treated with great affection by the BBMF crew. He also displayed great nimbleness for someone in his 90s as he scrambled over the main spar. Coming backwards down the ladder at the end of his visit Allan found a little more difficult. When he finally got his feet back on the concrete he declared “that was worse than going on Ops!”

“What was that Dad?” said Viv.

“The Lanc pre-take off checks, of course” came the reply.

“Can you remember them?”

“Yes! Trim, Mixture, Pitch….” and he ran through the whole lot to the last P, saying “Power – leading with the port throttles for take off”.

After the display we repaired to the Sqn HQ, where Allan was clearly interested in the many pictures on the wall. After a while in the corridor upstairs he suddenly shouted “bloody hell, that’s me!” Sure enough there is a picture of a Wellington with a group of aircrew in front of it, Allan is in the group and he can still remember many of the other names. It was taken after return from the first bombing raid on Berlin mounted by RAF Marham. Allan has since looked in his logbook and found details of the mission.

As we drove them home later in the afternoon Allan said “If I die tomorrow I’ll die a happy man”.

This year, your Association will be holding it’s Annual Reunion over the weekend of 22/23/24 September 2017. The format will be similar to previous years and dinner will be in the Officer’s Mess, RAF Marham on Saturday evening. This is an All Ranks event and all Association Members are welcome. For current Association Members, you will soon receive our Annual magazine, TABS, and the relevant forms to fill in if you wish to attend. Please complete and return to me, The Secretary, as soon as you can.
For those of you who are not yet Association Members, you will be very welcome to join us (numbers permitting and Assn Members will take priority), but please be aware that this event is subsidised by the IX(B) Sqn Association and therefore you would be expected to pay a higher cost. Alternatively, you can join the Assn for the princely sum of £10 a year and make the most of our Treasurer’s generosity on the evening!
If you would like to become a member of the IX(B) Sqn Assn then please email me at association.sec@9sqn.co.uk for more details.

“A funeral service for Wg Cdr (Retd) D Legg MBE RAF will be held at St John’s Church, Long Street, Devizes, Wiltshire, SN10 1PA, at 1300. All attendees are to be seated by 1240; dress for the funeral for military personnel is No. 1 SD (or single Service equivalent) with medals.  Black armbands are not to be worn.

The family have requested donations in lieu of flowers be made to the charity ‘Heads Together’, in the name of Wg Cdr (Retd) D Legg.
For further information please contact the Liaison Officer, Plt Off A Furlong on MoD telephone: 95261 7119, BT telephone: 01491 837766 EXT 7119.”

Here are a few pictures of our members laying a IX(B) Sqn Wreath at the Cenotaph on Remembrance Sunday. 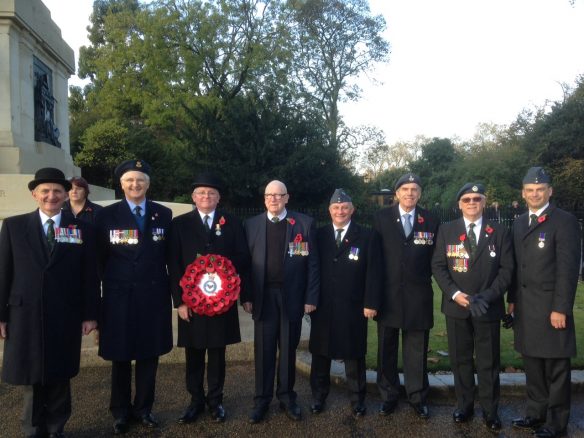 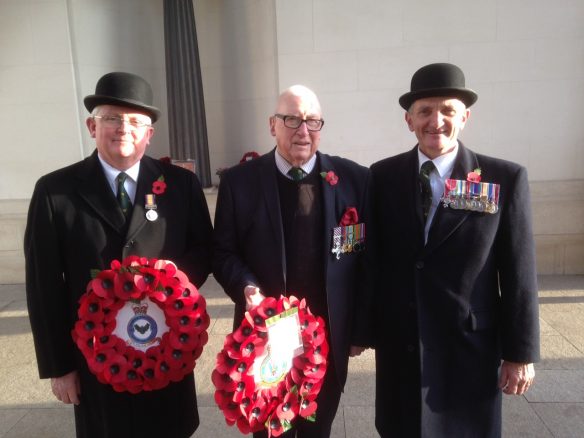 It is my very sad duty to inform you that Jack Linaker has passed away.

Jack Linaker was born on 2 June 1919 in Northants. As a teenager he was the National 10 mile time trial road cycling champion.He joined the RAF during WW2 and was trained as an Air Gunner. He was posted to 9 Squadron, at RAF Bardney near Lincoln and became the tail gunner in a crew with his wartime best friend, and subsequent lifelong friend, Bunny Rothwell. During WW2 they were the dynamic duo and enjoyed nights out in Lincoln very much.

On 21 Dec 1944, when returning from an operational sortie, his Lancaster crash landed and Jack’s rear turret was severed from the rest of the sliding Lancaster and he was catapulted into the air and landed in a potato field, minus his flying boots, which had come off. Bunny found him, then they looked around for the rest of the crew. Sadly they found 2 of their crew dead and their pilot was missing. He had been catapulted through the cockpit roof, still attached to his seat and was found alive. Jack returned to flying a few weeks later and was promoted to Flight Sergeant, then Warrant Officer. Jack was proud that in all his missions, he never saw an enemy fighter and therefore never fired his guns at a fighter, although he did fire at search lights many times.

Jack survived the war, having been promoted to Warrant Officer and married Theresa, who pre-deceased him. They did not have children.

Jack died on 21 Oct 16 and his funeral will take place at 1200hrs on Wednesday 16 Nov 16 at Kettering Crematorium and all are welcome. If you would like to attend, please could you let Bob Sutton know? He can be contacted on the following email: robsutton54@gmail.com

Colin Cole recently passed away. He was a member of 617 Sqn and was one of the last survivors of the successful Tirpitz raid.

Colin has always been very supportive  of the IX Sqn link to Bardney.

We’re very sorry to announce that another WWII veterans has passed away.

Cliff Black, former Navigator on No. 9 Squadron RAF, including the final Tirpitz Raid, BLACK, Clifford William (Cliff). JP NZ4213145, W/O, RNZAF, WWII. Cliff passed away peacefully in his 94th year on 7 May 2016. Loved husband of the late Shirley. Precious dad of Rob, Sonya and Renn. Grandpa/ Pop to Trudy, Logan, Jhi and Curtis. Great- grandpa to Lola and Jude. ‘A true gentleman, gone but never forgotten’ In lieu of flowers, a donation to the Tainui St John Ambulance may be left at the service. Messages to 476 Riddell Road, St Heliers, Auckland, 1071. A celebration of Cliff’s life will be held at the Mokau Hall, Mokau on Wednesday 11 May 2016 at 11.00am, followed by burial at Mokau Cemetery.

He was also a member of the famous COSTER crew, who diverted to Sweden and were interred.

We are sad to inform you all that Harry Kartz, one of our 2 remaining veterans from the Wellington era, passed away peacefully in hospital at the grand old age of 102 on 12 March.  Harry was also chairman of Aston Villa from 1978 to 1980 and was vice chairman when Villa won the First Division championship in 1981 and European Cup in 1982.  In 2013, Harry told the Birmingham Mail that ‘Seventy years ago I was flying Wellington Bombers over Germany for the RAF during World War II and I got away with that, so I feel very lucky.’ I spoke to his son, John this week who told me that Harry still felt lucky until the very end having enjoyed a full and vibrant life.

Footnote:  In 2013, Harry told the Birmingham Mail “I still follow Aston Villa – I’ve been a bit disappointed with them in the last few years but I think they’re coming back to form now,’’   As we say on IX(B)Squadron, TABS.

Links to articles in Birmingham Mail.